Jayuya: Remembering the Past, Demanding a Future

Home/Updates/Jayuya: Remembering the Past, Demanding a Future
Previous Next

Jayuya: Remembering the Past, Demanding a Future

Mutual Aid Disaster Relief is a movement decentralized throughout civil society linking and contextualizing the intersectional struggles of climate/social/environmental and economic justice, rooted and steeped in a power-from-below solidarity not charity ethos.

Throughout 2016/2017, Mutual Aid Disaster Relief volunteers have responded autonomously from the floods in Baton Rouge and West Virginia to the earthquakes in Mexico to hurricanes Matthew, Irma, and Maria listening and responding with affected communities.

Today, marks the anniversary of the Jayuya Uprising in Puerto Rico.

The uprising was the result of a long struggle against abuses by the U.S. colonial administration. By 1950, a half century of U.S. rule had put most of the island’s land into the hands of the Domino Sugar Company, and led to the dispossession of many in rural areas. Several massacres of unarmed demonstrators, chief among them the Ponce Massacre of 1937, where seventeen people were gunned down by Tommy gun wielding police, had shown that peaceful protest would be met with violence. In 1947 The Gag Law, “La Ley de la mordaza,” was passed, making Nationalist organizing illegal in many cases. Emigration was the only real escape valve, and there was then, as now, no voting representation of the island in the U.S. Congress. 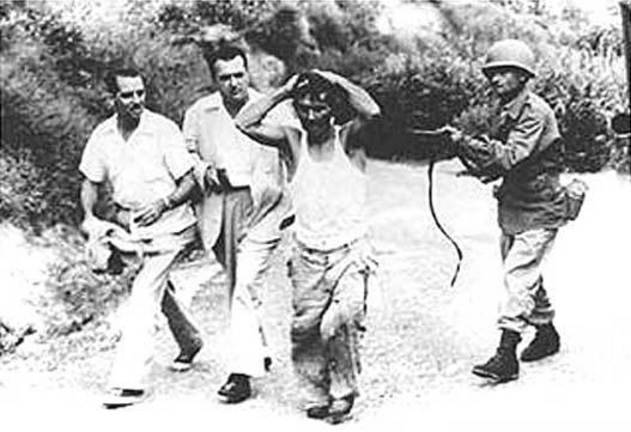 The 1950 revolution was quickly crushed. Puerto Rican National Guard moved into the liberated towns, supported by machine guns and field artillery. While there was some shooting back by Nationalists, armed resistance was actually minimal, because of the mismatch in armament. Nevertheless, P-47 Thunderbolts of the U.S. Air Force flew combat sorties against Jayuya and Utuado, strafing both towns with .50 caliber machine guns and reportedly 5 inch rockets. (Despite aerial bombing from biplanes and helicopters by militias and state police in isolated incidents like the 1921 Battle of Blair Mountain and the 1985 MOVE conflagration in Philadelphia, this is the only time the Federal military has bombed U.S. citizens on U.S. territory).

A near total news blackout, and the fact that Americans were transfixed by the four month old war in Korea, meant that the news from Puerto Rico did not resonate very far outside the Diaspora.

Today, when we’re seeing the very real and continuing effects of Puerto Rico’s ongoing status as a U.S. colony, it would be worthwhile to remember this history, and the legacy from it which is still playing out. The island’s crisis did not start with Hurricane Maria. It did not start with 2008 and the debt.

Already there are over Nine Hundred deaths in Puerto Rico (and counting) as bodies are burned with zero forensic analysis for attribution to hurricane maria and the tragic, provisional failure of the warring ‘united states’ in the storm’s aftermath.

A hedge of global and national politics is skirting the growing crisis in Puerto Rico where the weather beaten populous, if not in exodus or cooking alive in living rooms without power to run air conditioning, nebulizers or oxygen concentrators, are filling hospitals and funeral homes.

This is one story of Hurricane Maria. Another is one of people-power, self-organization, and autonomous grassroots organizing for survival spearheaded by Puerto Ricans themselves, and supported by accomplices and allies far and wide.

Our last Puerto Rico team held daily pick up and distributions throughout the island from Caguas to Barrio Amelia to Barrio Mariana  to San Lorenzo to Utuado to Isla Verdes and was able to arrive at the Camp of the Forgotten, a 29 home community stranded by a three story tall collapsed bridge in Utuado where we transferred several pallet loads of food and water through a camp-set-up pulley system in which a grocery cart on a steel cable carried supplies across the chasm to the people on the wrecked bridge.  A team of medics and relief workers climbed down into the chasm and crossed the valley to a two wooden ladder structure and climbed up to provide medical care to the people of the camp, which had self-organized intake/organization and redistribution for their community.

Our medical team saw patients every single day, mostly in their sweltering living rooms where elderly people were suffering from exacerbated chronic conditions and dehydration.  We treated for these issues and on one occasion personally drove a dangerously ill man from Caguas to the hospital with two of our medics staying with him through triage and initial examination until he was admitted.

We handed off solar and water systems to individuals and communities throughout the island. And our sustainable infrastructure team is waiting on the arrival of a recently ordered large scale water purification modular system and solar equipment to take to the island.

The most recent Puerto Rico team held reportbacks, radio, television and podcast interviews and are most recently featured in a documentary series called Trouble on Submedia for an episode termed “No Permission Needed.” 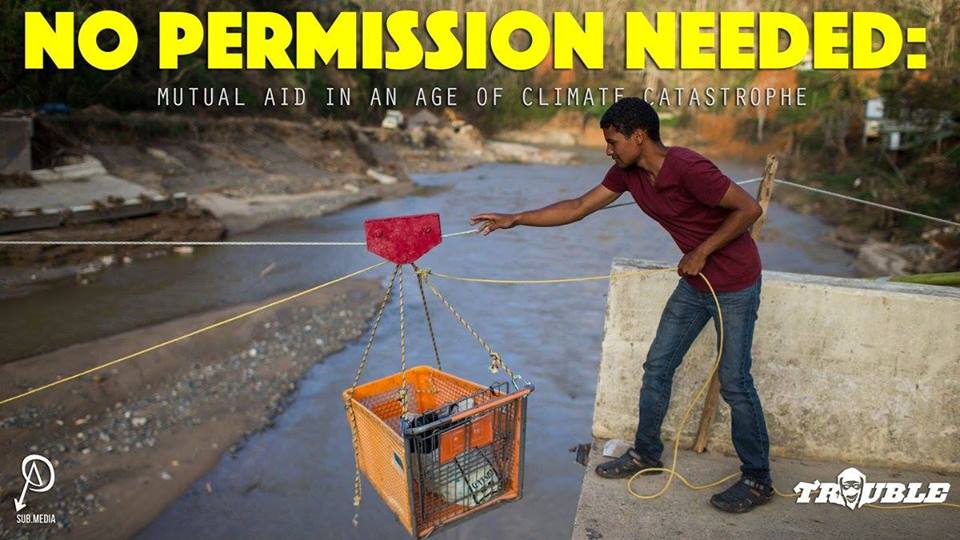 The crew estimates their distro while in Puerto Rico at 2 to 4 tons of food, water, and other supplies daily, medical provisions and care for dozens of people a day, all despite police repression.

Our next team of street medics, nurses, and other medical professionals leaves for Puerto Rico this week.

What we do, you can do too. We are, water filter by water filter, workshop by workshop, building a movement for mutual aid and direct action in response to climate chaos. And there is so much history yet to be written. We invite you to join in the making of it.

There truly is, no permission needed, not the state’s, not the financial elite, and not ours, for you to go out and support people’s survival and self-determination. Our collective survival depends on it.